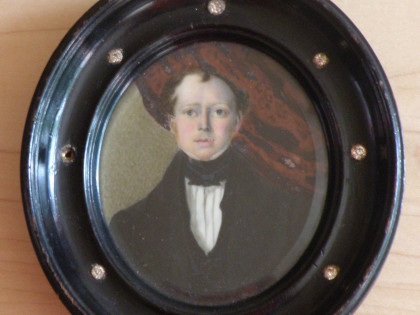 We know little about Dan Ubsdell (1817-1846). He had a son with Selina Hunt (born 1825), Richard Daniel William Ubsdell (1844-1851). At times he would have worked from his parents’ house 26 Lombard Street and it was here he was to die a horrible death from an internal abscess. At other times he worked in London and in the 1841 census he was living close by present day Centre Point (probably in a tenement) in Little Denmark Street, St Giles in The Fields, London. Frequently confused with his brother, we know that the June 1842 watercolour in the NMM of Lieutenant Frederick Marryat, son of Captain Marryat is signed bottom left Dan Ubsdell. Two miniatures have gone through auction rooms marked on the back Adelphi Gallery but with the address 26 Lombard Street. Dan exhibited at the R.A. a miniature of Lady Portman in 1843.  The recently auctioned miniature below is inscribed ‘Painted by Dan Ubsdell 26 Lombard Street Portsmouth Hants Jan 31 1839 £3.3.0. 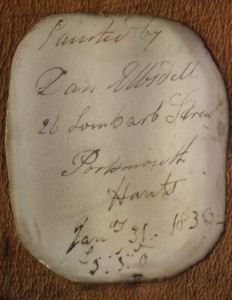